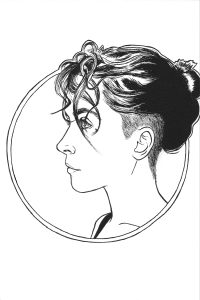 She began her comic-making career while pursuing her Masters at Duncan of Jordanstone College of Art with a feminist re-imagining of the archetypal Hero Story, “Story(cycle)”. Kathryn launched her independent small press Ess Publications with this ground-breaking comic. Her adaptation of “Macbeth, Act 1, Scene 1” won the inaugural Elsinore Award for Graphic Shakespeare in 2016. A fixture of the Scottish Independent Comic scene, Kathryn founded and ran the Ex Libris Book Fair, Dundee’s only independent book fair. Her short comics have been featured in UK comics anthologies such as Treehouse Comic, Dirty Rotten Comics, Meanwhile…, and Sliced Quarterly. She served on the committee of GENERATORprojects, an artist-led gallery and community space, during 2014. Her work has been exhibited in both art galleries and colleges in Sweden, Scotland, Japan, and the United States.

An experienced art educator, Kathryn lectured at her alma mater, Glasgow School of Art, The McManus Museum, Dundee Contemporary Arts, and presented a paper she co-authored at the 2016 Graphic Medicine conference in Dundee. She has also been featured as a panelist at Glasgow Comic Con, where her collection of short comics “Magpie” was awarded Runner Up for Graphic Novel of the Year in 2018. She is currently a teaching artist for Fleisher Art Memorial in Philadelphia.

In 2018, Kathryn moved back to the greater Philadelphia area, where she grew up. She participates in progressive grassroots community organizing, serving as coms director for her local chapter of Pennsylvania Stands Up. She lives with her partner, the most adorable cat on the planet, and a growing book collection that will one day swallow them all.